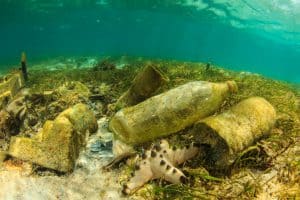 know, that in Germany over 5.7 million tons of plastic waste is produced every single year? (2016) Other countries are even worse. I did not know that it’s such a large amount, even though I’ve been paying a little attention to the amount of garbage I’ve produced for years. Anyhow, for a long time I have never dealt with it in detail. When I started doing it in 2016, I was shocked. So much plastic waste is produced every year?! But that will be recycled, right? Unfortunately, no. Only a small amount of it really gets recycled and converted into new products. In Germany, it is just 42 percent. In many other countries even less. Take, for example, the USA: There is only 12 percent of the waste recycled. The rest of the garbage ends up in landfills or even worse in nature. So the big question is: Is plastic really dangerous? Is it harmful at all? For humans, animals and the environment? This article will answer these questions. 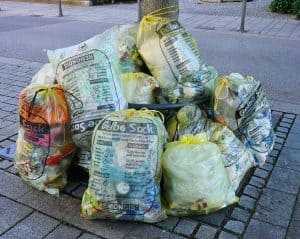 not want to bore you here with any chemical knowledge about what ingredients plastic is made of. The fact is that since the 1950s, plastic has experienced a massive upswing and has become more and more established in our society. In Germany alone, between 1994 and 2013, the amount of plastic waste increased from 2.8 million tonnes to the previously mentioned 5.7 million tonnes. Imagine the weight of 2 Cheops pyramids out of plastic every day. This is about the same amount of plastic waste we produce each year. In a European comparison, 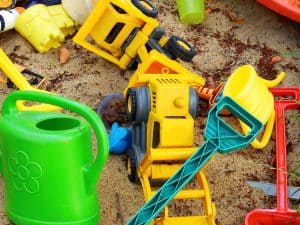 Germany is, unfortunately, leader in plastic production. 11.7 million tons of plastic are produced annually. Thus, Germany makes about 1/20 of the annual plastic production volume worldwide! The tendency of this sad development is rising. Not only in Germany, in almost every country worldwide. You only have to look around in your daily life. Everywhere you find plastic. In food packaging, cans and bottles. Also, many 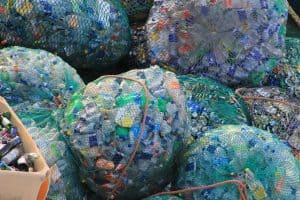 household items are made of plastic. Even in your clothes, you will find it. Not talking about the housings of electronic devices. Without plastic, we can not imagine a life anymore. It is undisputed that plastic has positive properties. It is malleable, inexpensive to manufacture and above all robust. It makes many everyday situations easier and even more convenient. But is there another side to the coin? Correct. Actually, this so highly advertised material holds a lot of dangers. For the environment, nature and even us humans. 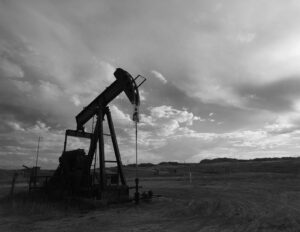 extraction of plastics has some negative consequences. The most commonly used raw material for production is petroleum. In addition to this coal or natural gas are used too. You’ve probably already heard of tragic stories about exploitation, destruction and catastrophic consequences for the people living in mining areas. 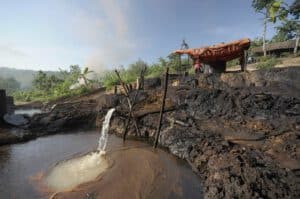 They all arise because we need a lot of oil due to our high plastic consumption. The complete process of extraction, transportation and processing requires a lot of energy. According to estimates, 100 to 500 million tonnes of CO2 emissions are produced every year – equivalent to the emission of 19-92 million vehicles on the road. This amount is caused only to produce plastic. Thus, we not only negatively influence mining areas but also promote CO2 emissions with the use of plastic goods. Of course, this also affects climate change. 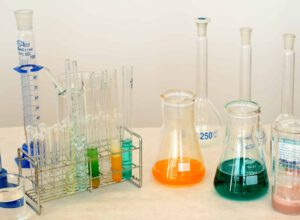 probably already heard the word “softener” somewhere. It makes the plastic softer, more flexible, more malleable and more elastic. Maybe you already heard or read the abbreviation BPA or “BPA free”. This term refers to such a softener. BPA, or Bisphenol BPA, works similarly to the female hormone estrogen. The consequences of this are that in addition to infertility and sexual disorders it can lead to diabetes, obesity and damage to the central nervous system as well. Since BPA can dissolve from heating up plastic, it has been banned since 2011 for baby bottles. But it continues to unfold its fatal effects on adults. Additionally, to dissolving into your food or drink while heating up, it can also be absorbed into the body by skin contact with plastic. In addition to BPA, there are so-called phthalates and polycyclic aromatic hydrocarbons, short PAKs. Both substances are also among the softeners and can harm organisms. For example, phthalates are suspected to be carcinogenic and, similar to BPA, have hormone-like properties. In addition to being toxic to reproduction, they can also cause asthma and allergies. PAKs can cause cancer and have a developmentally damaging effect. The sad thing is that all these substances are everyday companions because they are found in all PVC-containing products. These include, for example, food packaging. Thus, we automatically come in contact with all these substances every day, without thinking about it.

Giant garbage patches in the ocean 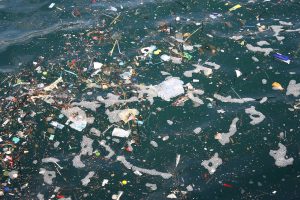 disadvantage of plastic is that it is not biodegradable. And that fact is one of the biggest problems. Often non-recycled plastic ends up in nature – on meadows or in forests. In the end, it always ends up in rivers and finally in the ocean. Maybe you’ve heard of big garbage patches floating on the ocean. It’s unfortunately not just a story. It is a sad reality. In total there are 5 of these large garbage patches. Additionally, there are several smaller ones. The most famous garbage patch is the North Pacific garbage patch, which covers several 100 square kilometres. Due to the ocean currents and other climatic factors, any garbage will eventually end up in one of these patches. There it remains or will eventually be washed ashore. Have you ever seen a completely littered beach? I guess we agree, that none of us would like bathing or spending time there. In Hawaii or in Chile, such beaches are unfortunately already partly reality, because these are regularly washed up with garbage. I’ve also seen beaches

like this in Mexico in the middle of a nature reserve. More than 6 million tons of garbage end up in our oceans every year – that is more than 2 Cheops pyramids, in order to use them again as a reference. 5.25 trillion plastic parts are already swimming in our oceans. Just in the North Sea are 20,000 tons of garbage. 75% of them are plastics. About 70% of this waste sinks to the bottom of the sea. So actually, it is just a fraction that we can see on the surface. Because of the incredible amount of garbage in our oceans you can find already now six times more plastic particles than plankton in most parts of our oceans. In some sections, you even can find 46 times more. All these plastics are a huge danger for animals and plants. They get trapped and need to die miserably. Additionally, the ecosystem is disturbed because of the plastic parts transport organisms to new places. These are just some of the sad consequences. 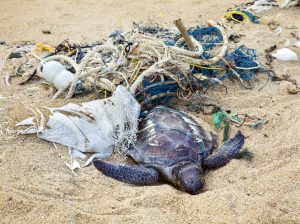 mentioned a few paragraphs above that plastic contains dangerous chemical substances. It is obvious that this is not only dangerous for us, but also for many animals. For example, because of the hormones in the plastic, many of the male animals become more and more female or hybrids. But that’s not all. Studies show that plastic acts as a magnet for other toxins such as heavy metals. Japanese scientists have shown that within a very short time, the concentration of toxins on a plastic part extremely multiplies as soon as it drifts in water. The plastic piece attracts toxins and creates a new connection with them. But what are the real consequences? If plastic floats on the sea for a long time, it decomposes over time into smaller particles due to the sun and the weather. This is 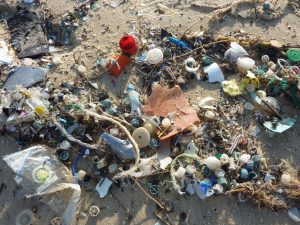 so-called microplastics. The resulting micro parts affect many animals because they mix it up with food. As a result, they confuse and eat it. Investigations of dead ice storm birds showed that their stomachs are filled to a considerable extent with plastic. If you extrapolate the number of plastics to humans, it would be comparable to having a full lunchbox full of plastic in our stomach. Inconceivably. In 2013, a sperm whale stranded in Spain. Scientists also found plastic in its stomach: 30 square meters of bags and foil were discovered. He died of intestinal blockage as a result of this amount. The plastic pieces eaten by the animals not only lead to stomach problems and inflammation, but the toxins in the particles also kill or contaminate the organisms. And at the end of the food chain, that also falls back on us humans. In total, 1 million seabirds and 100,000 other marine creatures die from the uptake of plastic particles every single year. 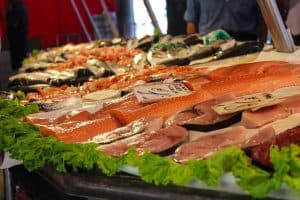 are the ones who use the plastic and thus pollute the oceans. We kill animals and plants due to pollution. We are destroying a unique ecosystem whose impact we can not estimate. In the end, we poison ourselves too. Because the plastic parts are not only eaten by fulmars or sperm whales. But they are also picked up by mussels, shrimp and fish, which end up on our plates. This process is called bioaccumulation. Thus, all toxic substances end up in our organisms. It’s actually shocking to think about this, huh?.

Is it really worth it? 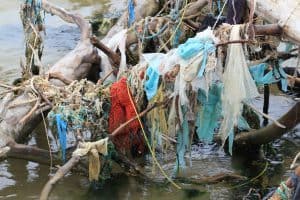 what price do we pay for our plastic consumption? Is a more comfortable life due to plastics really worth it? We actually have no idea which consequences this action will have on our lives and those of our descendants. Are we making sure we all get sick? Are we destroying our planet? Do we really want to consume so unbridled without thinking of possible dangers and consequences?

In my opinion: NO!

We should start to pay more attention to the substances we have around us every day. Each individual can contribute to the environment, our descendants and our world. Plastic will probably not be completely banished from our lives for the time being, but at least we can try to reduce the mass of plastic. A rethinking is necessary in any case. You also can contribute to this!

I show you here some tips on how you simply can reduce plastic in your life. Additionally, find here tips on how to reduce packaging waste.

What do you think about plastic? Do you care about it in your everyday life or have you never thought about it?